Book Review of "That Little Hardback" - a book by Chuck Borough, review by Susan Wenger 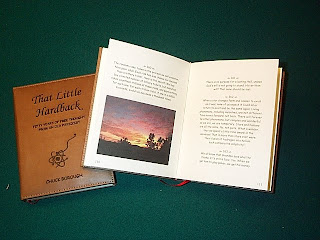 This is a pretty book, and would make a nice gift for someone. Since it is not in bookstores, it is likely to be an unusual and almost unique gift for the recipient. It has a pretty leatherette binding and ribbon bookmark. That said, on to the content.

This book is a compilation of 876 random thoughts by the author. They are not grouped by subject or by theme. Apparently he jotted down stray thoughts as
they occurred to him, starting when he was a teenager and going on for fifty years, and he put them together into a self-published book.

Some of his thoughts are provocative; most are not sufficiently developed to be of much use
to the reader. Samples: "Peace is comfortable. It's not hard to recognize. A coiled and ready snake is not at peace, even if nobody comes by to disturb it. Peace is not only quiet, but also includes an expectation that the quiet is not threatened." "Death: When life ends permanently. People often hope there is no such thing as death." There are also four better-developed essays also, which I did find interesting.

Recommendation: I would buy this book as a one-of-a-kind gift for someone whose taste in books is not known to me, such as for an office gift exchange; simply because it looks so nice. I would not use the 874 thoughts in this book for a book discussion panel. However, the essays would be suitable for a discussion group.

I respect anyone who journals his thoughts over the course of a lifetime. There is a lot to like in this book. The author didn't write it for me - he wrote it for himself and perhaps for his family and friends. Several of the tidbits are discussion-worthy, but most of them were not written toward that end and are of little use to the casual reader.

You can buy the book here:

http://www.thatlittlehardback.com/
Posted by Unknown at 4:45 PM

Promote Your Page Too

The Chance to Charity